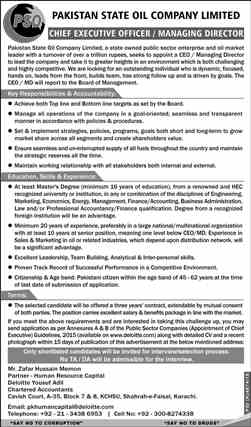 Job Advertisement on 04-May-2015 by Pakistan State Oil

Job Advertisement on 03-May-2015 by Pakistan State Oil

Job Advertisement on 03-May-2015 by Pakistan State Oil

Pakistan State Oil is one of the leading state-owned oil and gas companies in Pakistan. It is headquartered in Karachi, Sindh, Pakistan. PSO is a vertically integrated company involved in the entire hydrocarbon value chain from exploration and production to refining, marketing and distribution of petroleum products.
The company was founded on 1 January 1963 as the national oil company of Pakistan. PSO is listed on the Karachi Stock Exchange and since privatisation in 1997, it has been majority owned by the Government of Pakistan through the Ministry of Finance.
PSO's total assets were valued at Rs 261 billion ($2.5 billion) as of 30 June 2017. The company has around 5,000 employees
Pakistan State Oil has a market capitalization of Rs 199 billion ($1.9 billion) as of 30 June 2017. The stock is traded on the Karachi Stock Exchange and its symbol is "PSO".
In fiscal year 2016-17, PSO earned a net profit after tax (PAT) of Rs 45.4 billion (US$430 million). This was 21% lower than PAT earned in fiscal year 2015-16
The main products sold by PSO are:

Pakistan State Oil Government of Pakistan was established on 1974 and it is declared as Oil company wich is merging of multiple companies. In starting, the combination of companies reflect an entire structure can be regenerate. Which was fully implemented in 2000's. This regeneration include organization architecture, staff hiring and take authorization and decision making power to members of teams. This structure can be split company operations that will perform independently after. The Human Resource Department are developed in this reconstruction of company that will cause beneficial on coming years.

After Development and reconstruction, legal and financial activities can be watched by informative staff that will be check and balance on monitoring and control systems.Due to  this effective implementation of ideas and strategies PSO has been able to maintain its reputation and highly business and economical profit.